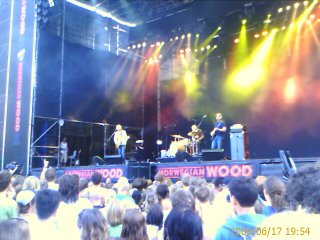 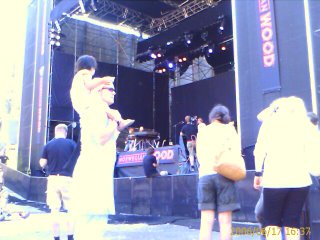 Norwegian Wood is an "exclusive" festival where they limit the numbers of visitors so its completely relaxed to sit and watch your favorite (?) band(s) playing. And it’s of course also fully possible to start the festival morning with the great bath.

Elvira Nikolaisen played better than expected and I was quite surprised actually. Looking forward to hear and see her perform again.
Richard Hawley performed ok, his music is a bit Frank Sinatra like – so one could say a tad too slow. Technically good performance though. The best part however was his in between jokes about his day out on the piss in Norway and the couple that decided to split up because they had the greatest sex ever but the rest 364 days of the year sucked.
Bigbang was quite entertaining. I don’t think they gave more than usual – but they have quite a few nice tunes that are hard to mess up – and brought up the mood of all of us.
Lou Reed tried to find a new musical expression which didn’t live up to the expectations – it’s just no fun listening to a 3 minutes song taking 15 minutes – but maybe he eventually will be able to put in enough elements to make it worthwhile. To many people’s disappointment he didn’t play “Perfect Day” (even when we have made a movie of this….) but make up for it – he did finish up with the “Free Jimmy” song!
All in all an ok night – but as we all know – Wednesday with Roger Waters would be King!
Posted by Moonknight at 21:44